OK, so when it comes to Christmas decorations, Shoreham's not exactly Oxford Street, but after dark it has a lovely atmosphere, which I set out to capture in this series of images for week 48 of my blog.

With both children at friends' houses for a couple of hours after school last Friday, I seized the opportunity to capture dusky scenes from the new Adur Ferry Bridge, gradually walking back through East Street, Shoreham's attractive pedestrianised area.  You can see the images become progressively darker, with the sky finally turning to black, after which I headed home.

I made exposures of between 10 and 30 seconds each, choosing the camera settings that would not only give atmospheric saturation of the lights, but would also eliminate all evidence of people walking past!  Hard to believe that during the exposure above, a couple of boys on their way home from school momentarily jumped in front of the camera pulling faces - and they say the camera never lies! 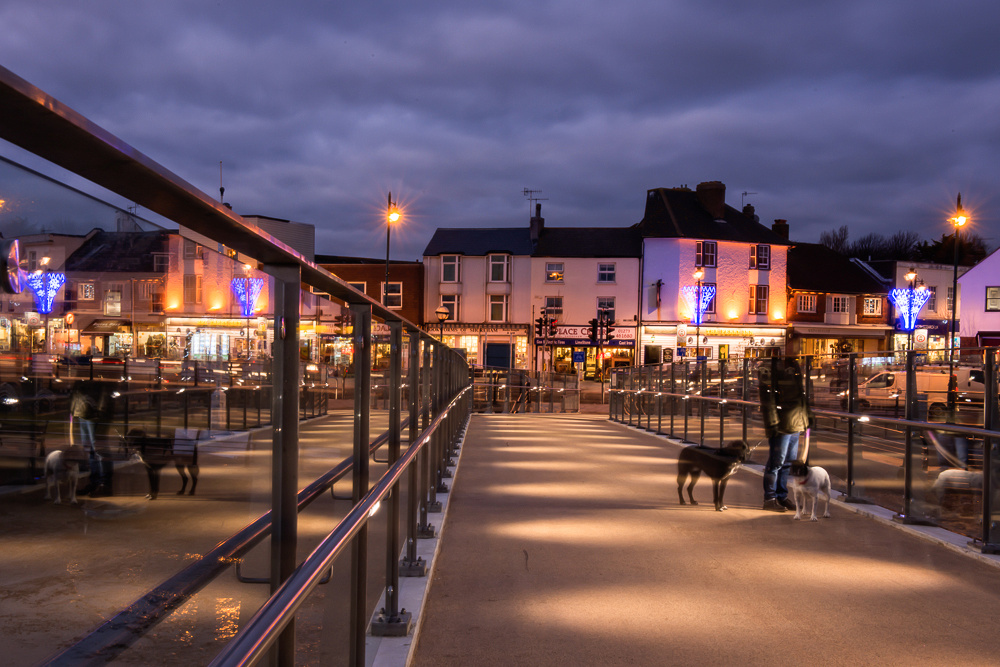 In contrast, the dog walker above paused for roughly the duration of the exposure, resulting in his inclusion in the frame, although you can see the 'ghosting' around this head and shoulders, and on the dogs, where they moved while the shutter was open.

And if you look closely at the image below, you can spot a trail of red lines traversing the bridge;  this was the result of a cyclist passing by with a flashing rear dynamo light. 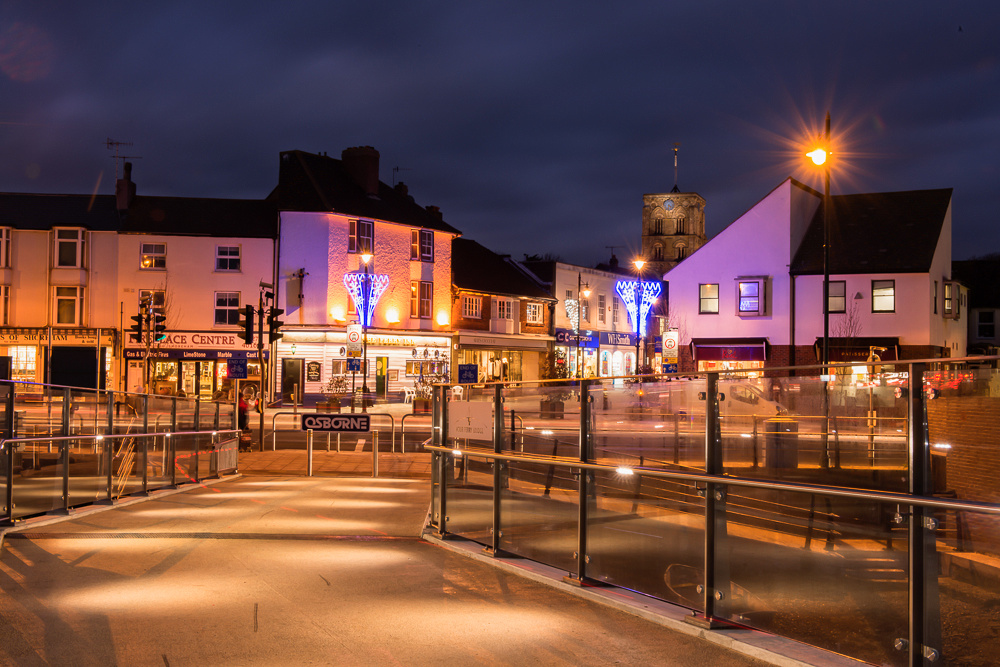 While I was photographing, a van with a hydraulic lift pulled up, and two men worked to put up the 'Merry Christmas' sign below.  By the time the decoration was up, there was barely any light left in the sky, so without waiting for the van to depart, I quickly composed the image to show the Adur Ferry Bridge sign etched onto the glass, with the lights of the high street beyond. 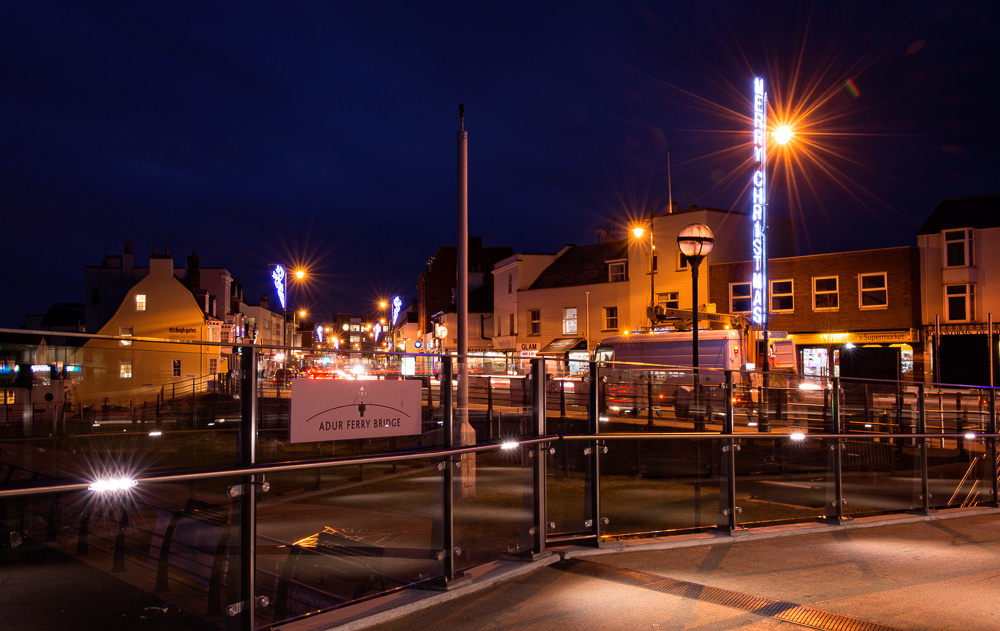 The resulting image (above) would have been far stronger without the pole in the centre, but as this blog is about Shoreham, and not winning competitions, I wasn't tempted to photoshop it out! 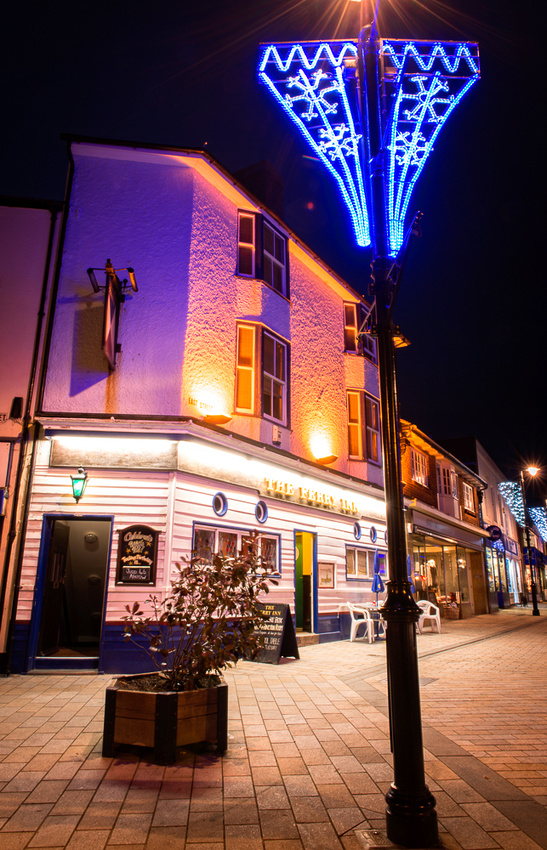 Having lost the blue of the sky, I then headed off the bridge and into East Street, looking for compositions that combined the neon blue of the decorations with the orange glow of the street lights.  Blue and orange are opposite on the colour wheel, and are pleasing to the eye when photographed together.  The pink hues resulted from light reflecting off the white paintwork of The Ferry Inn;  the 30-second exposure naturally saturated the colours. 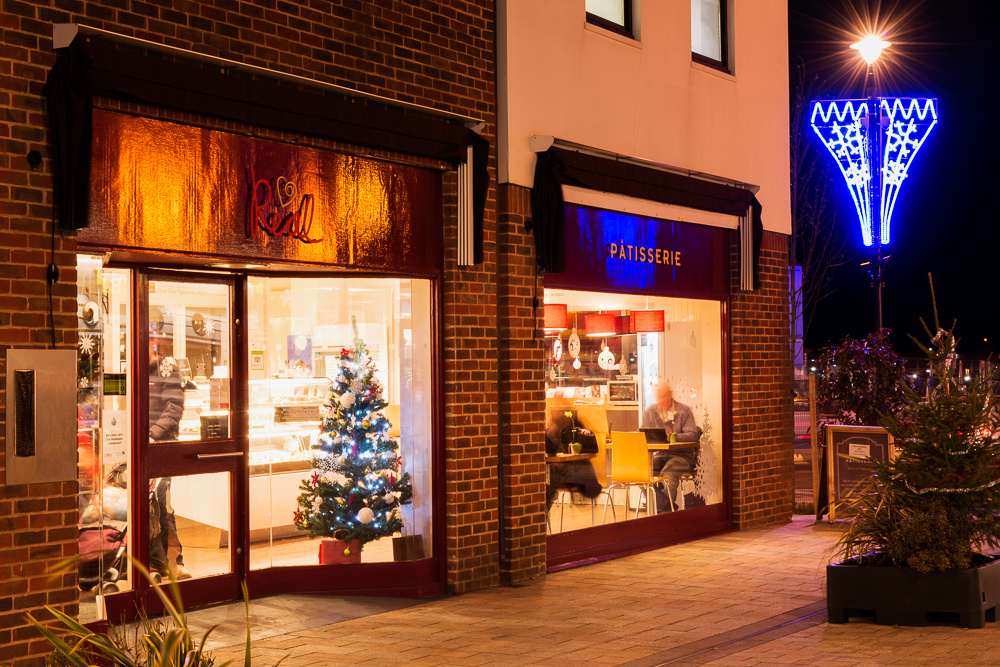 In from the coldImage by Shoreham-based Wedding and Lifestyle Photographer, Jenny Rutterford Photography

After dark, the Red Patisserie looks particularly inviting;  had I not been on a mission to capture the beautiful blue-encrusted Galleria before being reunited with the kids, I might have been tempted.  But as it was, I forwent the hot chocolate and slice of something yummy in favour of my final exposure - a view along East Street from Shoreham's Christmas tree, which I later cropped into a panoramic.

The brillant blue lights on the Italian restaurant were so numerous that despite the black skies, I actually had to reduce my exposure time considerably to avoid blowing out the highlights and rendering them white. 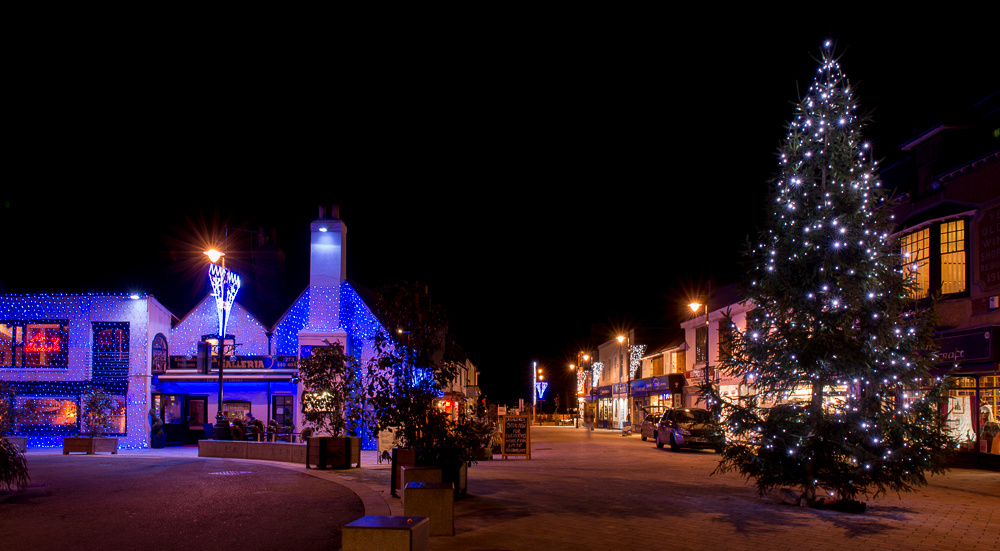 Unexpectedly, I came back from my photographic walk feeling a little more Christmassy than before I left, and after uploading my images, made a start on my Christmas shopping online!  I've still got a long way to go, but it'll get done somehow.  It always does...

To all my readers who celebrate the season in some way, I hope you soaked up some of the festive atmosphere from my Shoreham photos. Especially my Florida friends, who at this point are doubtless fed up with seeing inflatable Santas in 90 degree heat.  The first ones pop up at Thanksgiving, so as I write, they'll have been ho-ho-ho-ing in neighbourhoods for 10 days already!  I do prefer Christmas in England, although come January I'll take the sunshine and humidity over cold and grey any day!  Santa, if you're reading, I've been good this year....

Thanks for stopping by, and see you next week! - Jenny x