In complete contrast to last week's beautiful snowscapes, this week I am blogging a series of monochrome images from a cold and windy morning spent on Shoreham's fishing pier. 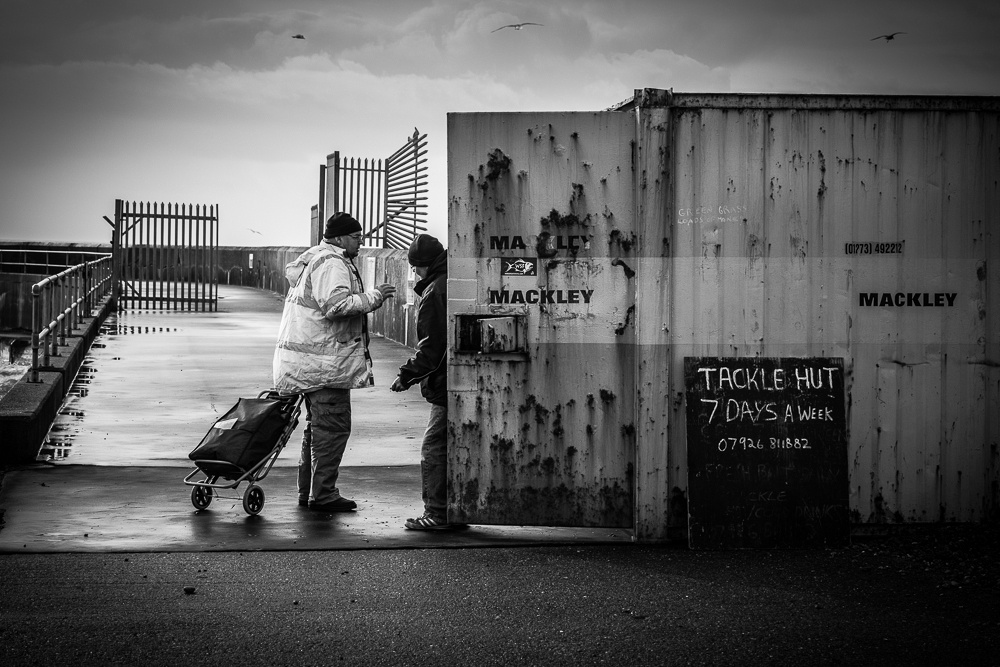 Stocking up for a morning's fishing

On my early morning arrival, the pier was deserted, but after this tackle hut opened, a gradual trickle of fishermen interacted with the hut volunteer, and made their way to the end of the pier.

The weak sunlight reflected off the wet surfaces of the pier, emphasizing its shape and texture.   I framed my shot using a wide angle lens, then waited until the fisherman had reached the curve of the railing to press the shutter.  The lone person completes the triangular composition formed by the foreground railing and the marker at the end of the pier, and makes the image more dynamic and interesting than it would have been without his presence. 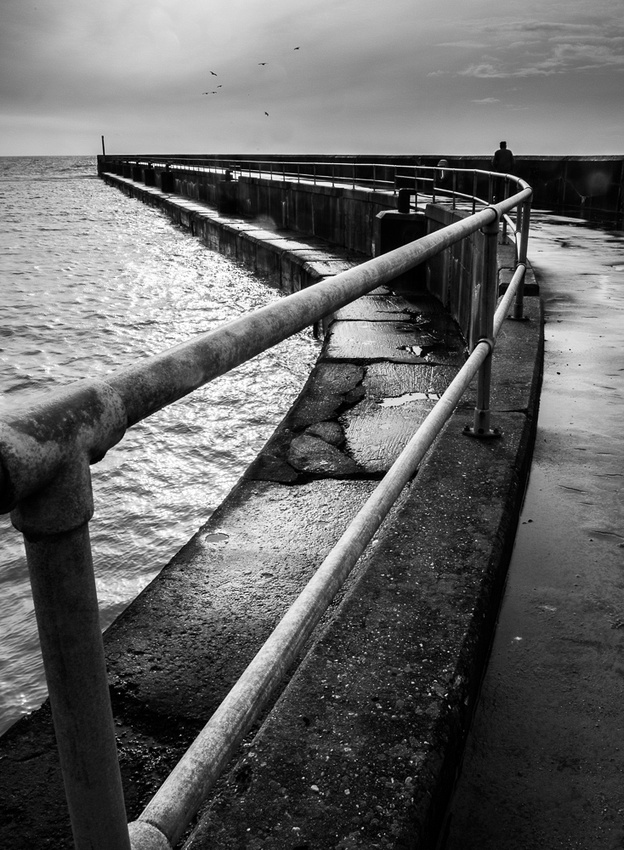 Walk along the pier

Early winter sunlight quickly gave way to clouds and increased wind, causing the waves to pick up intensity and lash against the rocks at the base of the pier.  When I placed the photos below side by side, I liked how the curve of the wave mirrored that of the lifebuoy. 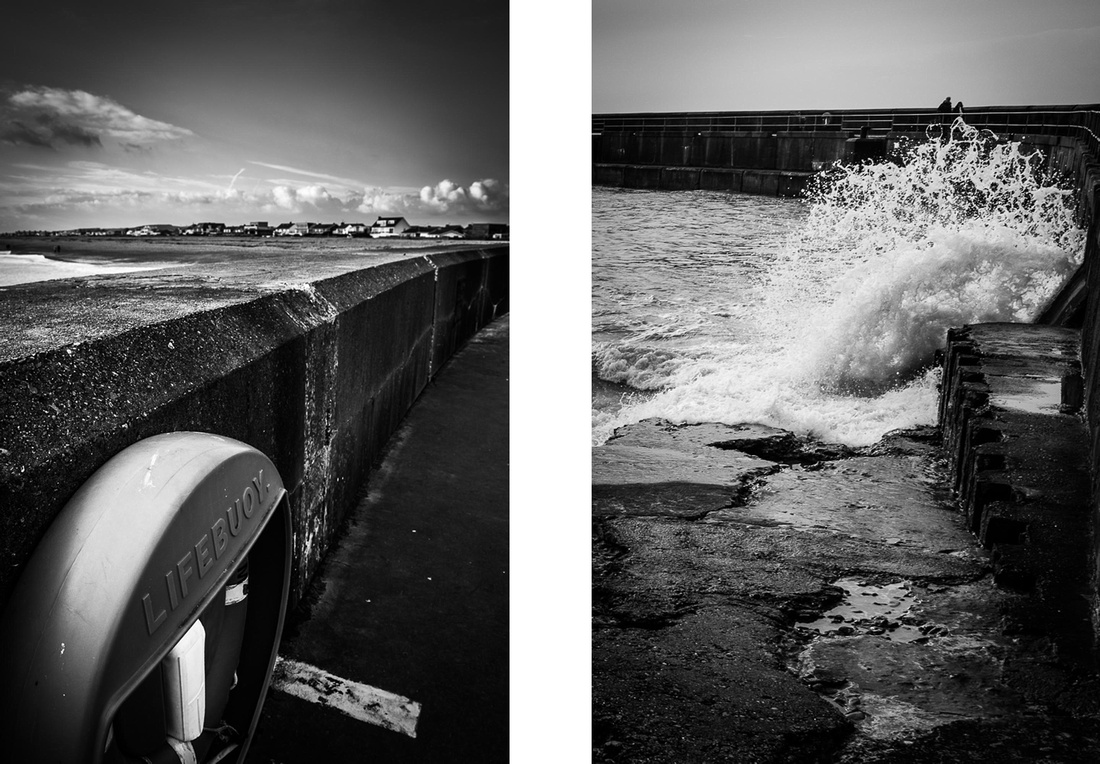 I got chatting with the person manning the hut - he told me the pier is kept open by a team of keen volunteers, of which he is one.  From nearby Worthing, he retired from city life in the IT sector, swapping his daily London commute to a simpler lifestyle fishing and looking out to the sea.  He generously allowed me to take his portrait at the entrance to the tackle hut that he inhabits for six hours each day.

This final picture was actually taken on a separate occasion, a few days later.  The tide was much further out than it had been that first morning, and I was able to climb up onto a sea defense structure the other side of the bay, allowing me to photograph the fishing pier from a different perspective (although this, my favourite image, was focused more on the elements of nature than the pier itself).  The tackle hut is the white rectangular shape to the centre right - all closed up as the image was made at 8.00am before the volunteer arrived.

The dramatic shapes of cloud and shadow merited a black and white conversion, so it seemed fitting to include it here alongside my earlier pier images. 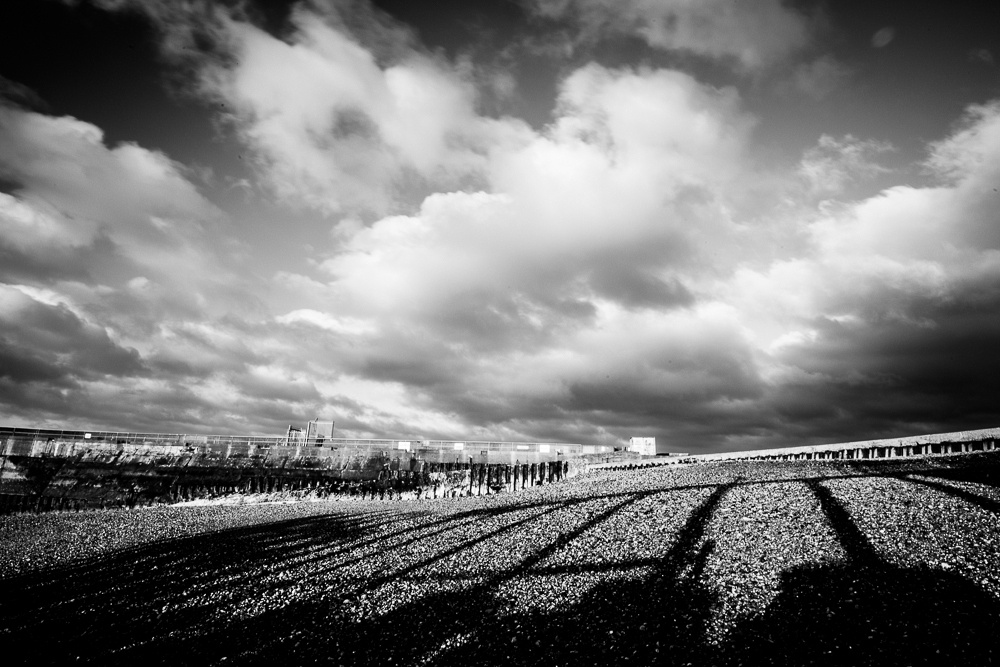 I hope you enjoyed this week's monochrome photo narrative - please "Like" or comment if you did.  Next week back to colour, for some classic views of Shoreham town.  Thanks for reading!