Hello and welcome back to my blog!  Well, I certainly wasn't expecting a return to snow in mid March, but it gives me a chance to show you what happens in Shoreham-by-Sea when the schools close!  With the snow falling pretty heavily (and kids in tow!), getting out the tripod wasn't really an option, so I quickly abandoned the idea of snowy landscapes, and simply captured a few hand-held shots of Shoreham's Buckingham Park. 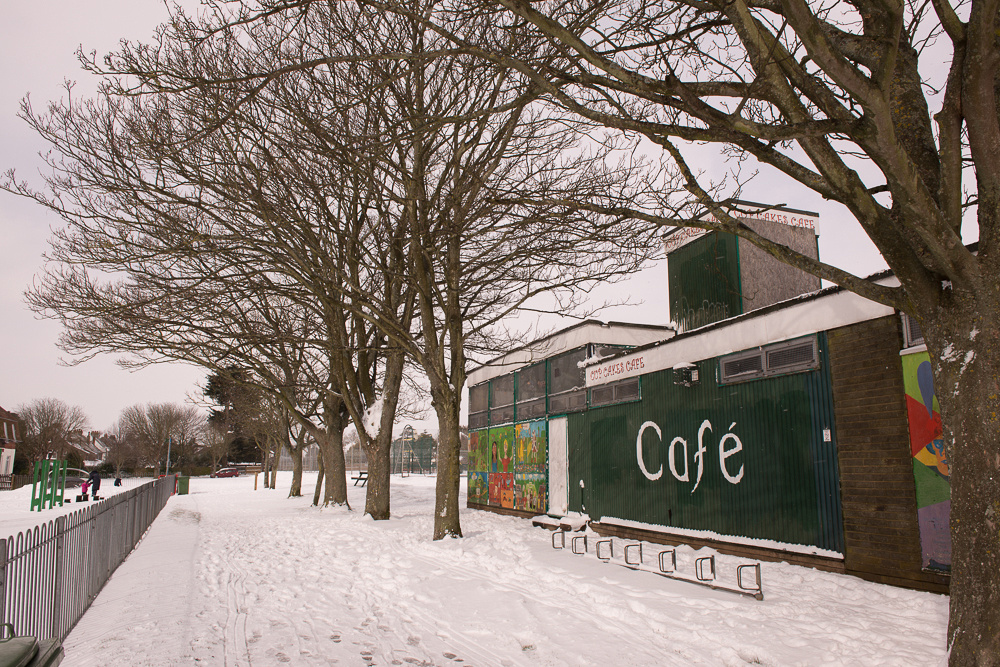 This is Cupcakes Cafe (which gamely featured in my Red Nose Day blog last week), taken early in the morning before the hoards of cold children beat a path to its door for hot chocolate with marshmallows and cream.

And below, the top entrance to the park, briefly lit up by a weak sun breaking through the clouds.  I really like the contrast between the cold, crisp snow, and the warm hues of the brick wall.   For me, it makes the scene inviting rather than bleak. 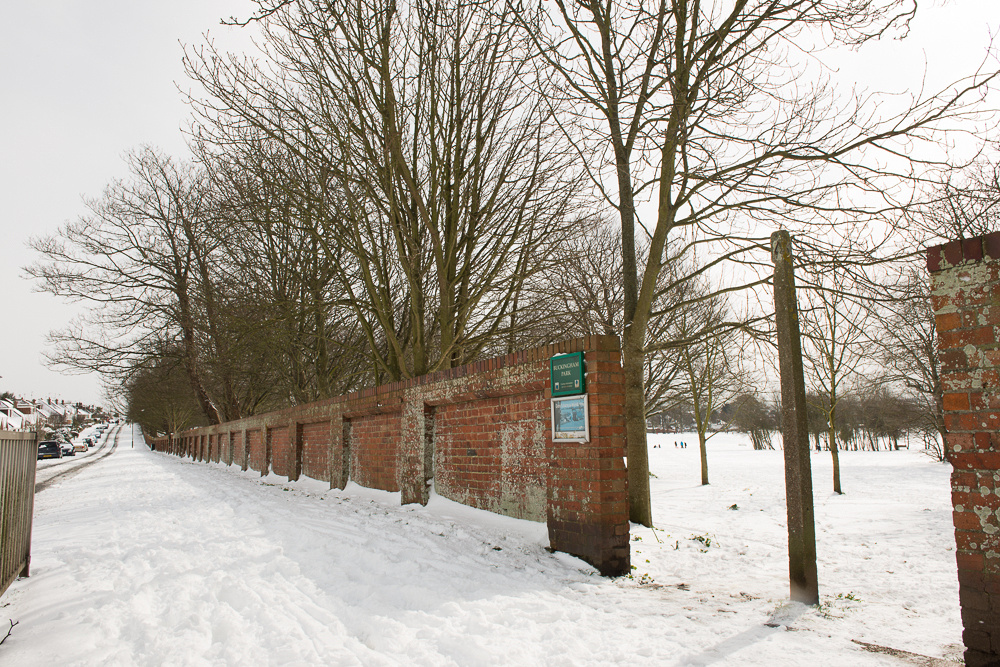 Buckingham Park is a large sloping park, with a pathway running from top to bottom.  It's a fair old hike to the top, but fun to sledge down (well, if you're under twelve, anyway).  Having never seen Buckingham Park like this in the four years we lived there prior to moving to Florida, this year, it's become a rather too familiar sight!  As I write, there is more snow forecast for the coming weekend, but the kids have lost all interest in sledging and, to be honest, I'm longing for spring to start! 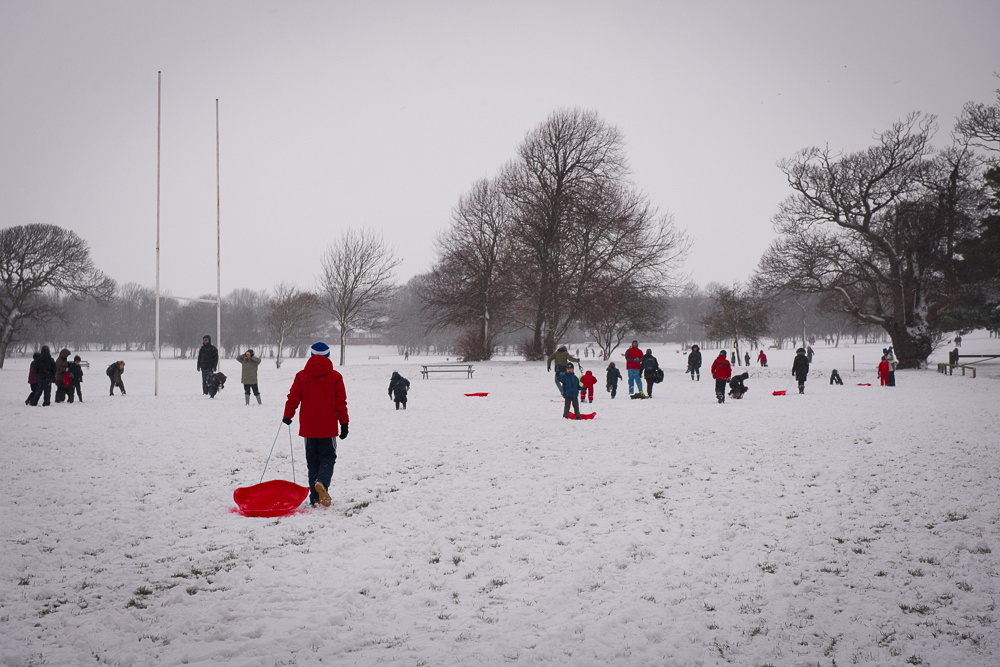 Here, I deliberately positioned myself so that my son was in the foreground about a third of the way into the scene before pressing the shutter;  the eye is drawn first to him, then further into the scene to the people beyond.  The accents of red really add interest to this photo, as well as the two images below.  Looking at those, I positioned the children approximately two-thirds into the scene, to take advantage of the leading lines made by the snowball 'path' and the footprints. 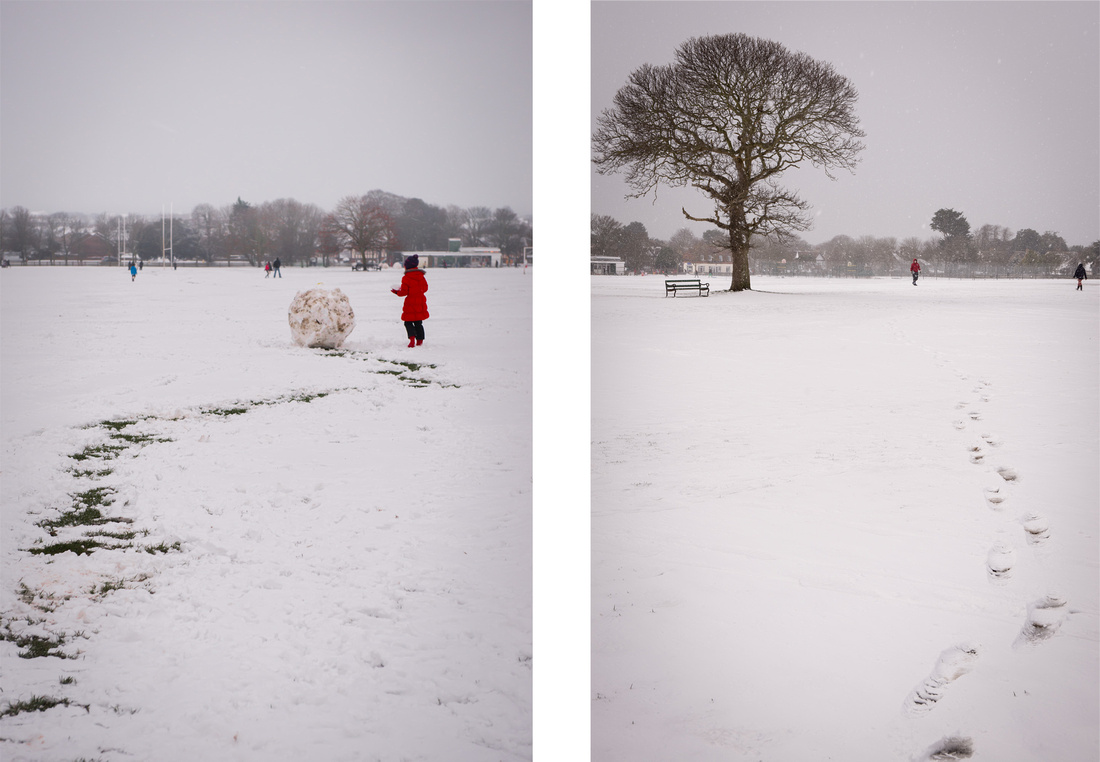 If you look closely at the picture on the right, you can see the snow falling against the backdrop of distant trees - on days like these, I use a cross-shoulder 'sling' camera bag and a single lens (typically a 24-70mm zoom), which I can quickly pull out of my bag, compose, shoot, and put away again.  A far cry from my long-exposure snowy beach hut images in Blog Week 5, but the only option if I want to have a working camera by the end of it! 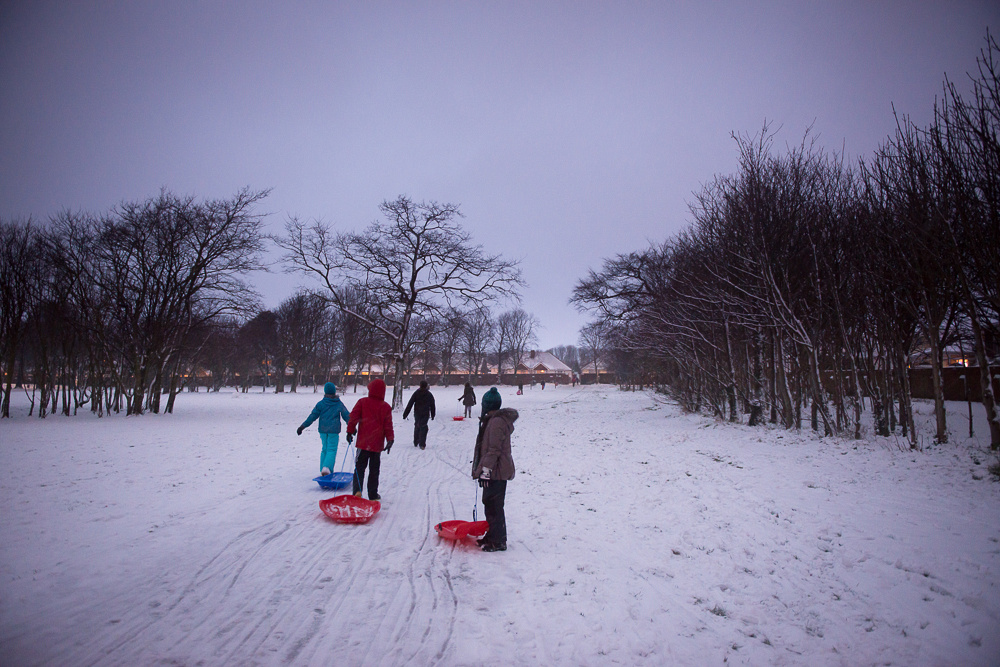 I can still feel the cold biting at my fingers as I took this photo!  It was late afternoon, and starting to get dark, and we'd been out several hours..... time for just one last sledge downhill!

And just before leaving, I made one last image, which I think will appeal to the tree-lovers among you (you know who you are!).  The colour of the sky behind the silhouetted clump of trees inspired me to get my camera out one final time.  I would have needed an ultra-wide angle to get this shot in a single exposure from where I was standing, and, if you were paying attention earlier, you will know that I travel light when it's snowing.  So I made three separate handheld exposures, lining them up as carefully as I could without a tripod.  Photoshop did all the rest! 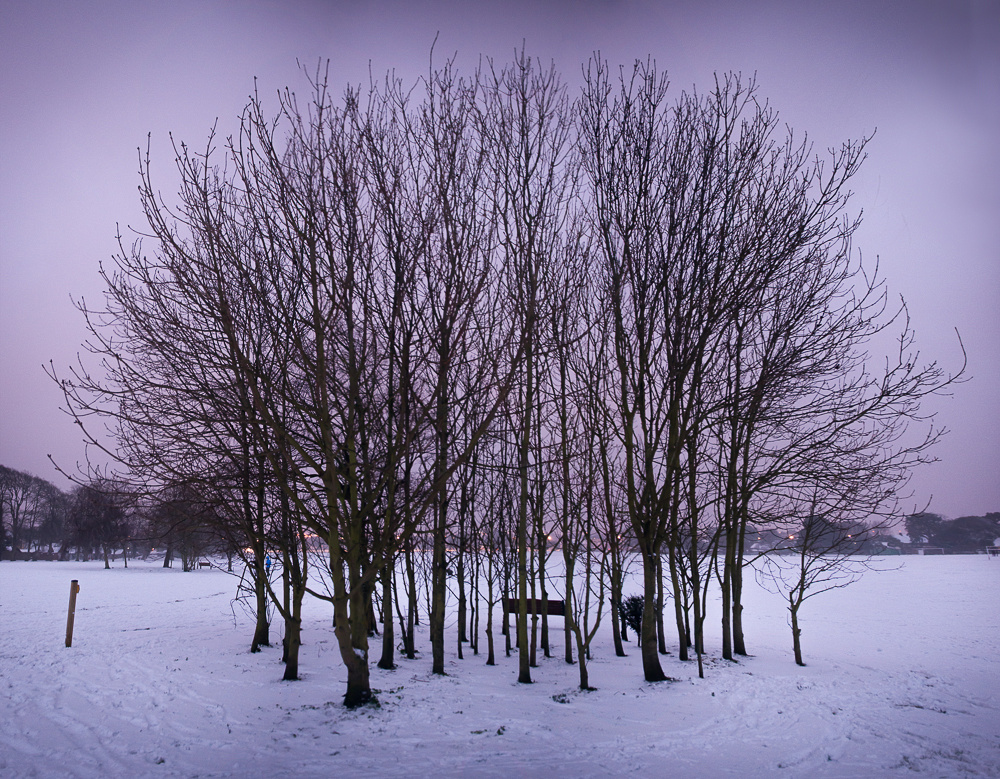 Well, I hope you enjoyed my experience of Buckingham Park!  I was hoping to shoot for next week's blog this weekend, but the forecast isn't looking too good... fingers crossed.... Thanks for reading, see you next week, rain or shine!