What a difference the sun makes!  I desperately wanted to photograph some colour, after the gloomy skies of the previous week.  So after the school run, I headed off to the river with no real plan in mind.  With my hiking boots on, and still caked in mud from the previous week (who has time to clean boots?) I decided to take advantage of the low tide and head out onto the river bed to capture colourful boats against bright blue skies.

To give you an overview of where I was, here's a panoramic of the scene, composed of two photos taken from the bank, and later stitched together in photoshop.  The buildings to the North are part of Shoreham's Ropetackle development, which was built around 2005.  I squelched my way down the mud flats onto the shingle and mussel bed of the River Adur, where I enjoyed three whole hours of shooting in lovely sunshine. Bliss!

I searched among the boats in the foreground until I found one in the best colours to complement the Ropetackle site -T.T. Lady Rose Shoreham fitted the bill perfectly. 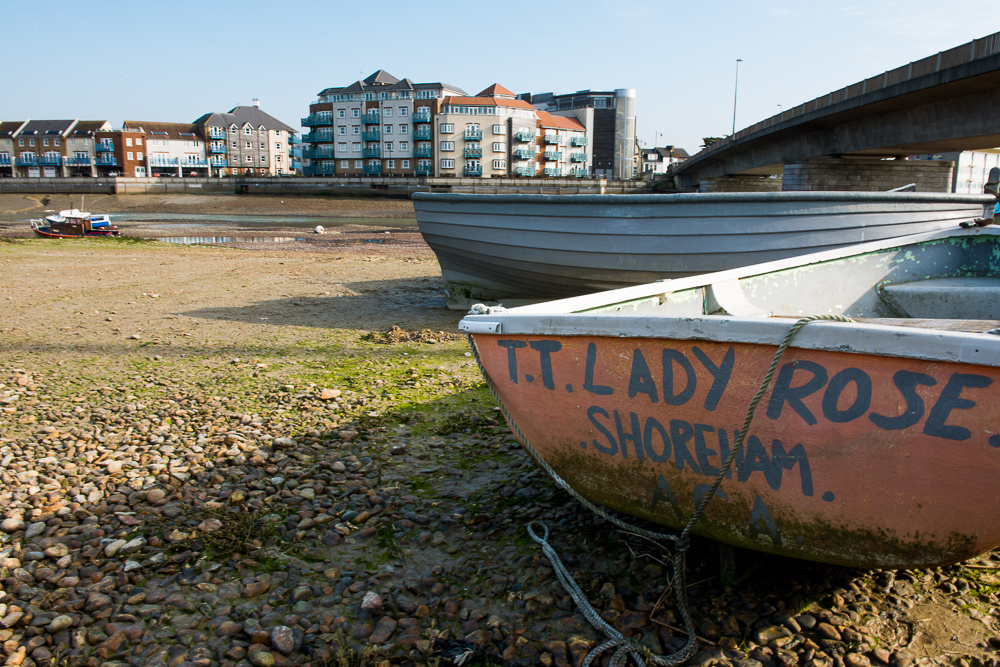 I then headed out towards the centre of the river, turning round to capture a photo of one of my son's favourite places - the Adur Outdoor Activities Centre (AOAC).  I started with some straight shots of the AOAC building with boat in the foreground.  But as I wandered around looking for different viewpoints, I found that by including a little of the reflection of the AOAC building in the photograph, alongside that of the boat, the image became far more interesting and unified.  Raising or lowering your tripod by an inch can make a huge difference! 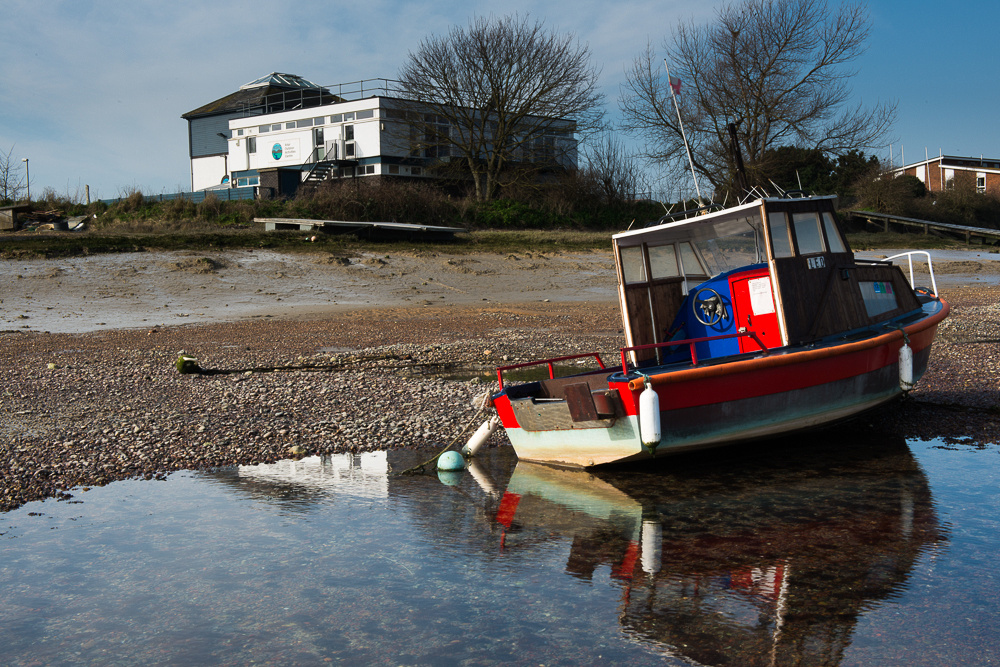 A while later from further upriver, I looked back to see a man standing on the boat I'd used for my foreground, and went over to chat and see if I could take his portrait.  While invaluable for landscapes, I find tripods to be more of a hindrance to people photography.  By the time you've adjusted them to the right height, the subject has probably lost interest, and what you lose in tack-sharpness is more than made up for by a great expression.  The exceptions are low-light portraits, or any occasion when you want to combine a portrait with a slow-shutter speed, for example, when 'painting with light' (see the last photo in Blog Week 5 if you want to know what I'm on about). 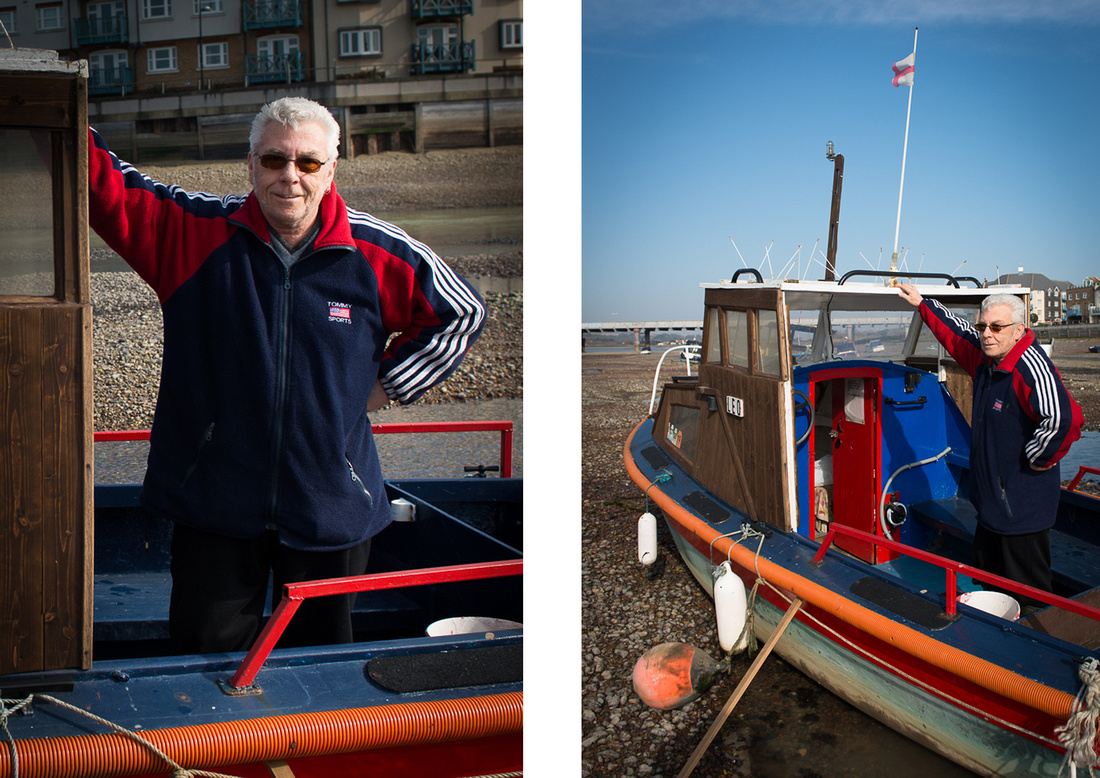 Anyway, Jamie (the man in question), was more than happy to oblige.  He's a full-time carer, who tries to spend time on his boat, 'Leo' at least every other day.  It's clearly his pride and joy, and a respite from his demanding job, and I was sad to hear him say that the lack of night time security provided by the authorities often resulted in boats being vandalised by kids.  Still, he shrugs it off, saying that clubs with better security have double the mooring fees. 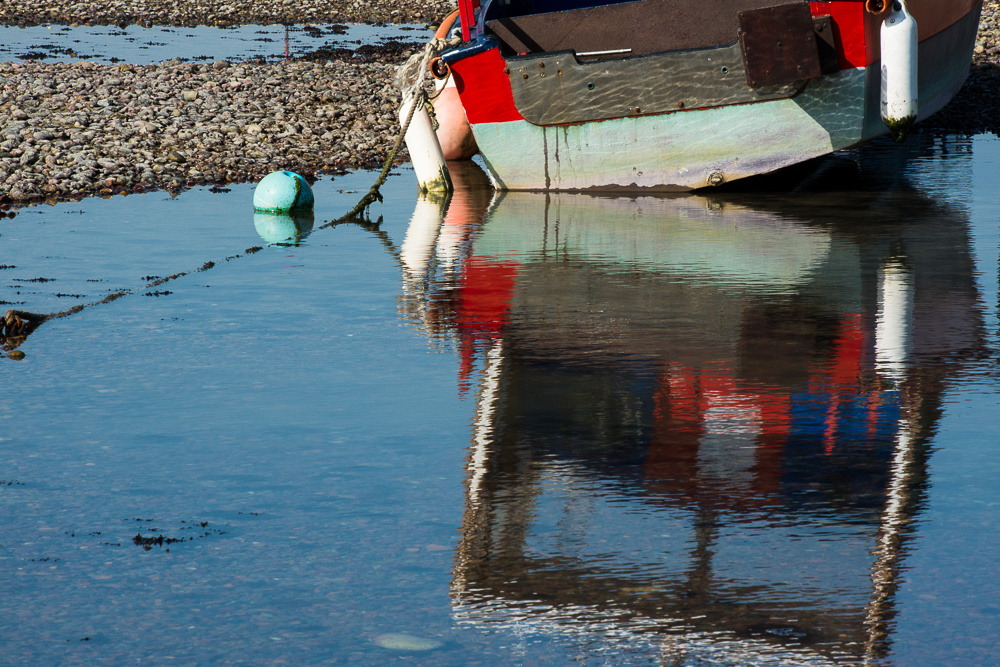 My next self-imposed challenge was to capture a train in motion over the rail bridge, with boats in the foreground.  There's a separate category in the UK Landscape Photographer of the Year Competition for rail images, I think it's sponsored by Network Rail.  Anyway, I thought it might be quite fun to have a go, so started to practice... 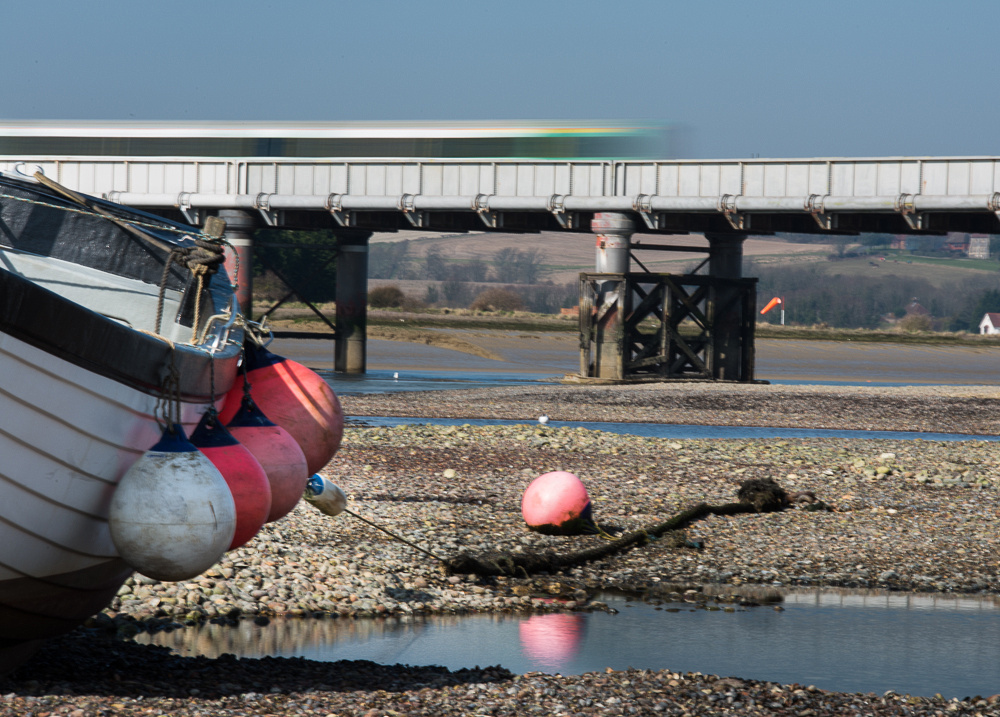 I found that shooting trains in motion is actually much harder photographically than it first appears!  For a start, in bright sunshine, it's impossible to get a slow enough shutter speed to sufficiently blur the train for the look I wanted.  But luckily I came prepared!  For the technically minded among you, I set my camera to its absolute minimum ISO (50), attached an 8x neutral density filter to my lens, and managed a speed of 0.4 seconds at the lens' minimum f/22 aperture.

It did take me a while to get to that point, first trying a 4x neutral density filter, then trying different lenses and camera angles to get the composition right.  I ended up using my 70-200 zoom lens to get enough compression to keep the train prominent enough in the frame.  And between each re-take, I had to wait typically 15 minutes for a fast enough train to come through.  Hence the three hours spent on the River bed.  I'm sure the inhabitants of Ropetackle must have thought I was a train spotter (yes, there is a difference....!) 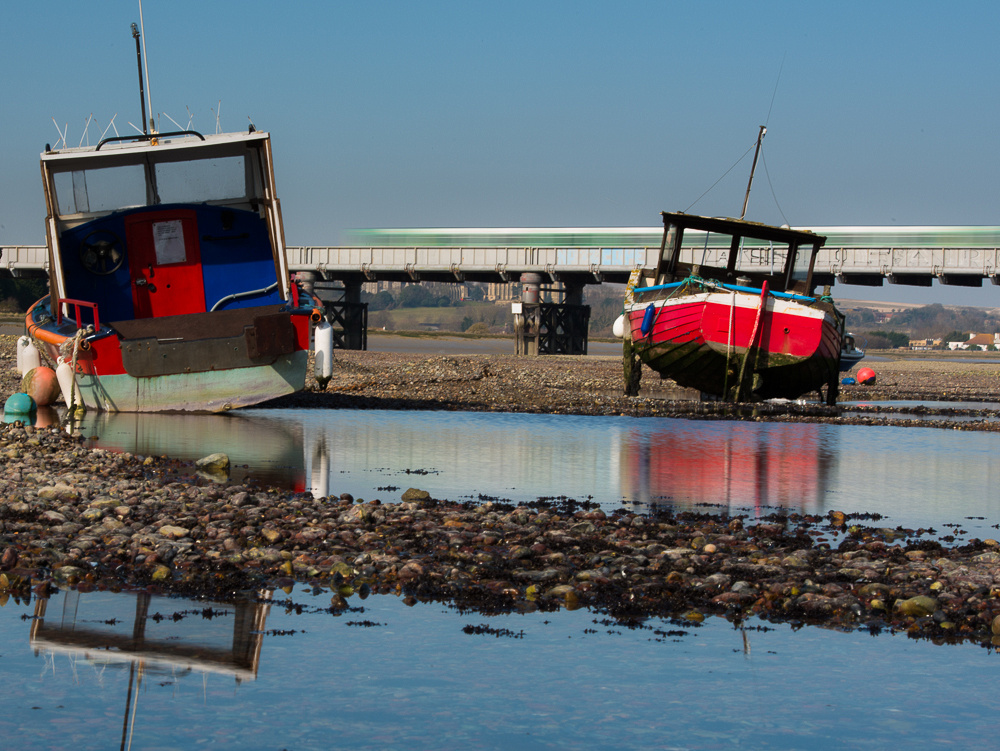 For this final attempt (my favourite!), I had the tripod legs fully splayed out, so the camera was less than a foot off the ground.  I did this to make the boats visually higher than the train for a more interesting composition.  Having found the right angle, I then waited a couple of trains for a sufficiently 'green' one, to make my image (the white trains don't work nearly so well!)

Well, that's all for this week.  I know that some of my readers are photographers (you know who you are!), so thought you might appreciate the technie stuff.  And if there was anything you particularly liked (or didn't), I'd love some comments.... thanks!